One of the main characteristics of an epidemic is the effective reproduction number (Rt), which indicates the number of people each infected individual will further infect at any given time. Being able to estimate Rt is an important task, because this number defines whether the epidemic is expected to grow (Rt>1), or will start declining (Rt<1). In this post, I suggest sliding SIR method of estimation of Rt based on fitting SIR epidemic model to the infections data in different countries.

This post presents the joint research we did with Tatyana Petrova from Lomonosov Moscow State University. The code that we describe here is available on GitHub, and you can easily run it in Azure Codespaces or Azure Notebooks to do your own studies. Corresponding paper is available on preprints.org - please cite it if you use any part of the code.

Let’s start with the basics of how any epidemic evolves. The simples model for describing an epidemic is called SIR model, because it contains three variables:

In this model, each variable is a function of time, and we can formulate the following differential equations that describe the behaviour of the model:

This model depends on two parameters:

To model the epidemic, we need to solve those differential equations numerically with some initial conditions $S(0)$, $I(0)$ and $R(0)$. We will use the example from this chapter of the book [SciPyBook]1.

First, let’s define the right-hand-side of the differential equations:

Suppose we want to do the modelling for 120 days. We will define the grid of points:

Let’s model the epidemic in a large city with 12 million population – similar to the one I live in. Let’s start with 100 infected people on day 0, and assume the contact rate to be 0.2, and recovery period 30 days. Initial parameters of the model will be:

We will then solve the equations with the initial parameters, to obtain vectors of S, I and R for every point in our time grid: 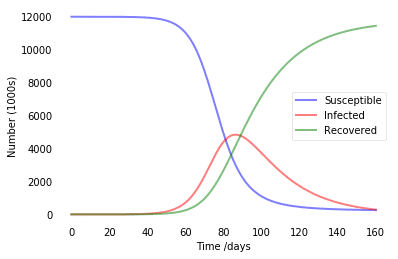 In SIR modeling, it is common to estimate the basic reproductive number of the epidemic $R_0={\beta\over\gamma}$ (see this paper for details). In our example, we were having R0=4, which is pretty similar to estimated numbers for COVID infection. So this model tells us that without any quarantine measures, in a city like Moscow we will end up with about 5 million infected people at once in about 80 days, and at the end everyone would go through the disease.

Below, we show a couple of more graphs for different R0 values:

It effectively illustrates the idea of flattening the curve, because the lower is R0 - the lower is the number of people infected at once, which helps minimize overload of healthcare system.

Determining parameters of the model

In our example, we have taken the values of β and γ somewhat freely. However, if we have some real epidemiological data, we can try to determine those values by fitting resulting SIR model to most closely correspond to real data. In this case, we will be solving optimization problem, and optimizing parameters to minimize the metric.

To get the data, we will use COVID-19 Data Repository by the Center for Systems Science and Engineering (CSSE) at Johns Hopkins University, which is available here. From this dataset, we will take the numbers of infected, recovered and deceased people, as well as the information about each country population. We will need to do some Pandas heavy lifting in order to join those tables and transpose the dates, until we get a table similar to the following for each country:

We then smooth out the numbers by computing 3-days rolling average on all the columns:

We also compute the Removed column that contains the number of people removed from susceptible population.

We will call the resulting table country dataframe, and our code contains function make_frame, that retrieves this dataframe and population for a country given its name.

Now, to estimate R0, we need to start from a common point for all countries, let’s say, from a day when the number of infected people exceeded 1000. We will then focus on a period of several days, denoted by ndays. Taking one week into consideration seems like a good idea.

The way we compute the error is the following. Because the most accurate number that we have is the accumulated number of total infected people at a given date (not considering removed ones), the easiest way would be to compute the number of new cases at each day, dV. In the SIR model, the number that corresponds to the total number of infected people will be represented by I+R, i.e. we add the number of people currently infected (I), and that have already undergone the disease (R). The number of daily new cases in the SIR model will be thus given by day-wise difference of I+R, denoted by dI. The error value returned will be the norm of the dV-dI vector.

To find parameters, we need to optimize model function with respect to parameters β and γ. In our experiment, we have found that 7 noisy data points do not allow us to optimize two parameters effectively, thus we fix γ parameter according to medical studies (see this report by WHO), that indicate mean recovery time of 30 days. We then use minimize method from SciKit Learn to find and return the optimal value of β:

Below you can find more formal mathematical description of the process.

Here is the result we obtain for several countries available in our dataset:

In practice, it is interesting to see how the parameters of the model change over time, in reaction to protective measures implemented by different countries. Similar to the basic reproductive number R0 that is a characteristic of a disease, we can consider effective reproductive number Rt, which has the same meaning – number of people that a single infected person further infects – but during the pandemic, taking into account isolation measures and the proportion of nonsusceptible population.

We can follow the same approach for estimating Rt:

To compute Rt, we find the optimal parameter β for each day, by organizing a sliding window over our country dataframe:

Once we have the value of beta, we can compute Rt for each day in the country dataframe:

Some formal details are below.

Once we get the value of Rt into country dataframe, we can explore the behaviour of the outbreak in the graphical form. Here is how epidemic unfolded in our home country, Russia: 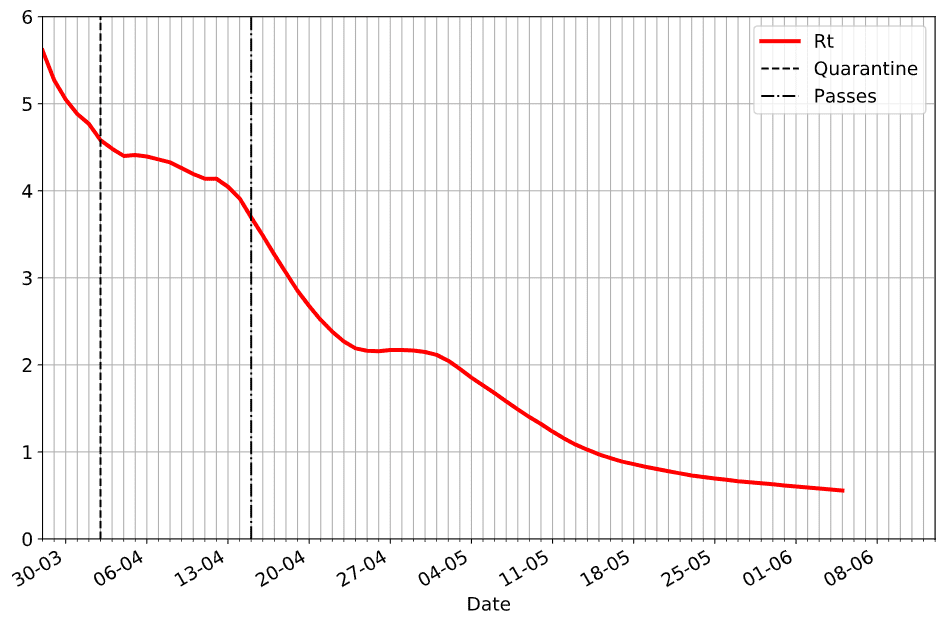 On this graph, we have indicated two dates when isolation measures were put in place:

From the graph, we can clearly see the effect of those measures on the slope of Rt curve.

To put this graph into more context, we can add the daily number of new infected cases on the same plot: 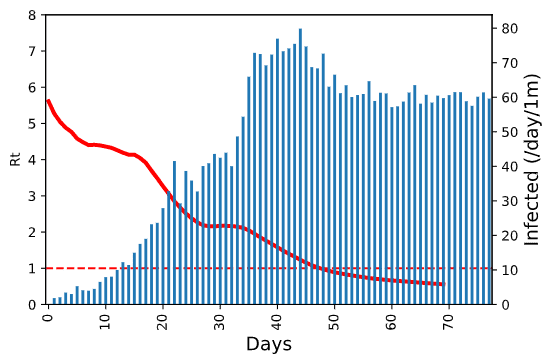 On this graph, we can also clearly see how the epidemic starts slowing down at the same time when calculated Rt value gets below 1.

To be able to compare the epidemic spread between countries, we do two things in this plot:

The data source that we are using contains the data for 188 countries, and some of them (like US) are further broken down into territories. It gives a lot of freedom to different studies and comparisons, which are not subject of this post.

However, here are the graphs from a few countries that we found interesting: 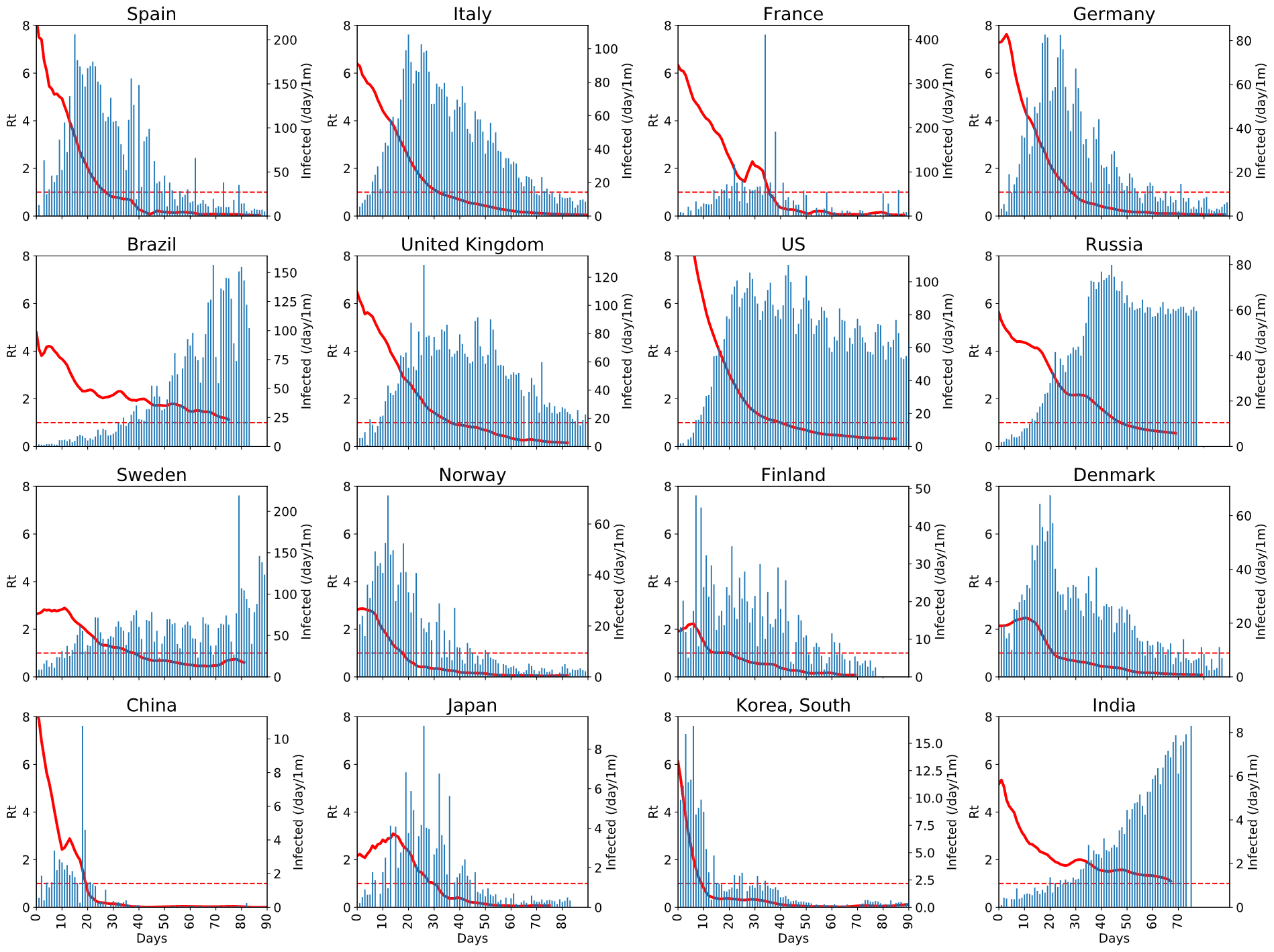 You can click on the image to enlarge it and see the details. From this graph, you can see:

A few things need to be noted:

To see more clearly how epidemic unrolls, it makes sense to plot all Rt graphs on one plot, starting from “Day 0”: 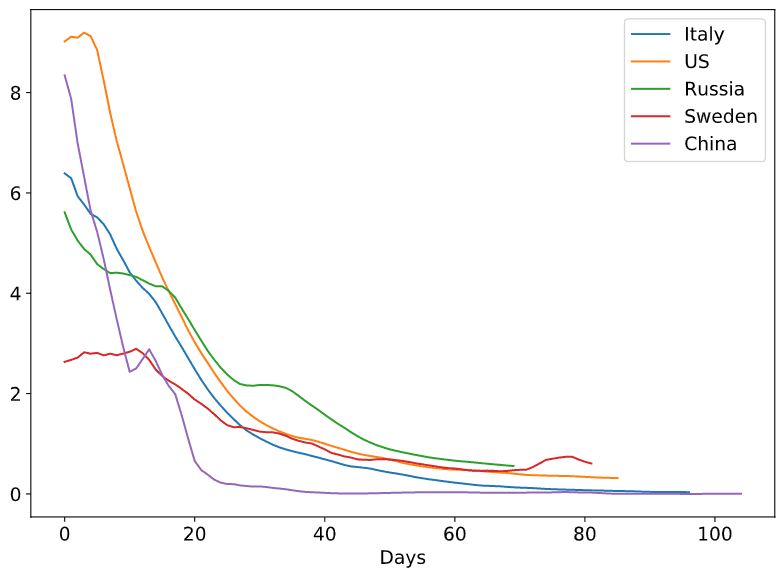 From this graphs we can clearly see how the public awareness in Sweden from the start made Rt very low comparing to other countries, but how it still less effective than quarantine measures. Also, we can see how quarantine in many countries has very similar effect on Rt, with the exception of Russia, where we can see horizontal plateau around April, 24th (possible result of permit checks in Moscow Underground on April 15th).

Here is also a plot with more countries - it looks too beautiful to be omitted, but on the other hand it is almost impossible to figure out the details. 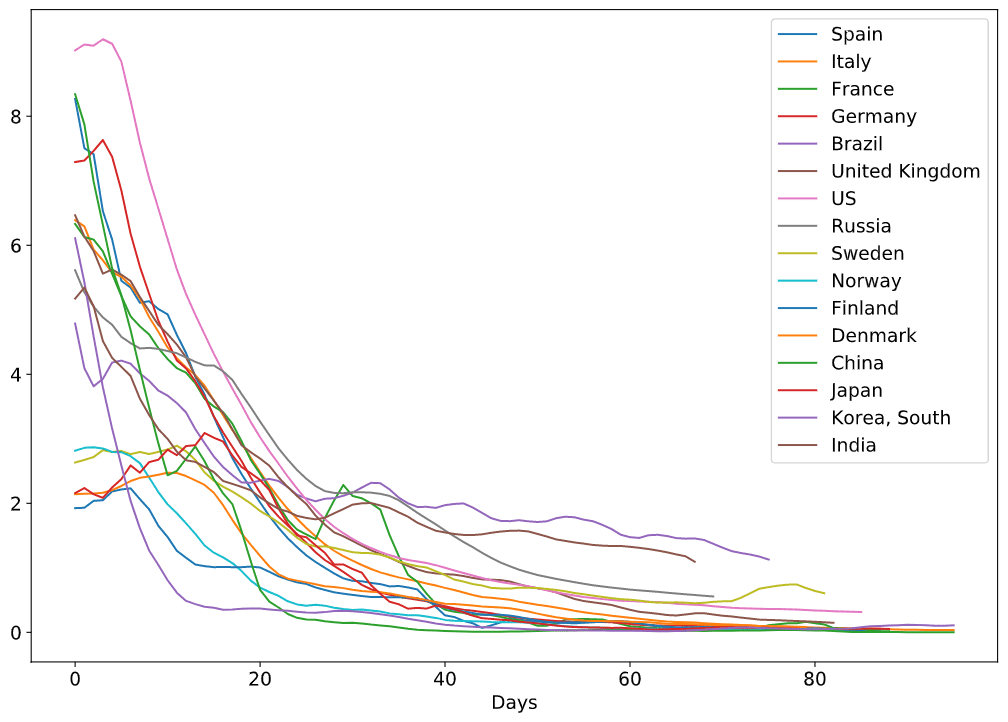 You are free to use the analysis code from our GitHub Repository, provided you make a link to our post, and preferably paper on preprints.org. Here is the correct reference:

The paper contains more detailed explanation of the method, a comparison with other approached to Rt estimation, and more detailed discussion of results.